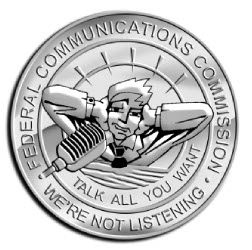 Free speech is the most basic element of democracy. Diversity of opinion is the crucible by which ideas are measured. A free press is one protected even when the speech is not agreeable. In the absence of diversity, bad ideas are never challenged. There is no democracy without free speech.

I am horrified by the repeated attempts of the FCC to lift media ownership limits. It is happening again! The FCC has become an enemy of the people. Our own trustees have betrayed us. Consolidation of media resources dilutes opinion and shouts down diversity.

Through this aggregation and consolidation, free speech is violated and democracy is compromised. This is nothing but open warfare against our democracy by corporate, for-profit, for-power interests.

Now some might spin media consolidation as good for free speech. This is simply double-speak.

If Jefferson or Madison did not have the ability to project their voice (through the media) their differences of opinion would never have resulted in our great nation.

A whisper can change the world, but it must still be heard. The megaphone shouting that results from media consolidation drowns out the whispers of the people. It is no less than corporate propaganda.

Even if you don’t agree with me on the basis of free speech, please consider the effects that media consolidation has on the over all quality of what is presented.

At what point will ultimate fighting become “pay-per-view” tickets to criminal executions? Perhaps you believe public executions would be a good thing? Without free speech, an informed debate can not happen.

If the media is consolidated, they will decide public opinion.

This should speak to your moral center. Alternatively, it might speak to your political heart. If you want to protect your values and the voice you need to communicate those values, you must struggle against media consolidation.

The FCC should be lowering media ownership caps not raising them.

Money, power, profit, greed...these are the virtues that you support if you do nothing to stop and reverse media consolidation. If you remain idle on this issue, you will become part of the problem.

If you do not put a stop to this erosion of the Constitution, you will violate your oath and become an enemy of the people. You toss around talking points about the War on Terror... The worst form of terrorism can emerge within our own government.

The worst form of terrorism can emerge from your office.

It should be noted that of the countries the United States of America criticizes, 100% of them lack a free press.

Ultimately, information will be free. Ultimately, the people will see the truth.

What it means to be a Republican has been thoroughly corrupted by the Bush Administration and insane influences by religious extremists. Republicans now represent all that is wrong with America.

And if you disagree, then we truly are damned.

Your remit is scoped by the Constitution and backed by "We the people."

Only you can do these things...and the people need you.

We the people need you to stand strong against media consolidation.

Richard A. Wermske
Citizen and Voter