Caring For The Introvert 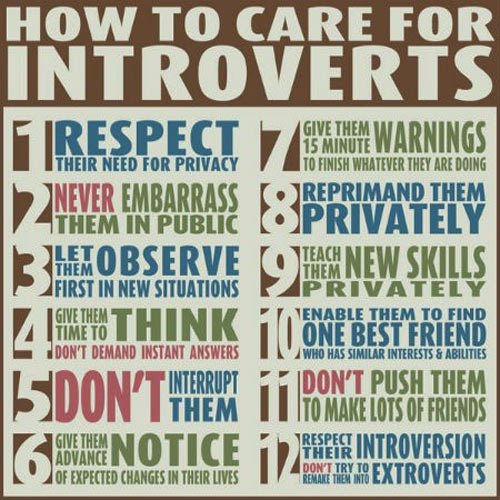 Do you know someone who needs hours alone every day? Who loves conversations about their ideas or feelings, and can give a dynamite presentation to a big audience, but often seems awkward in groups and maladroit at small talk? Who has to be dragged to parties and then needs the rest of the day to recuperate? Who growls or scowls or grunts or winces when accosted with pleasantries by people who are just trying to be nice? If so, do you redouble your efforts to draw him out? Regard him as aloof, arrogant, rude? Tell this person he is "too serious," or ask if he is okay?

If you answered yes to these questions, chances are that you have an introvert on your hands—and that you aren't caring for him properly. Science has learned a good deal in recent years about the habits and requirements of introverts. It has even learned, by means of brain scans, that introverts process information differently from other people (see the abundant references below).

On the other hand, perhaps a crowded cocktail party feels like a holding cell to you, even as you gamely keep up your end of the chatter -- chances are you're an introvert. Introvert disposition is frequently misconstrued as shyness, social phobia, or even avoidant personality disorder, but many introverts socialize easily; they just strongly prefer not to. In fact, the self-styled introvert can be more empathic and interpersonally connected than his or her outgoing counterparts.

If you are behind the curve on this important matter, be reassured that you are not alone. Introverts may be common, but (spanning all racial, ethnic, religious, economic, and gender lines) they are also among the most misunderstood and aggrieved demographics in America, possibly the world.

I know. I am an introvert.

That said, I have good, well-practiced social skills. Usually. And I am far from shy. I retired from a very successful cyber-security and management consulting career. I enjoy long conversations that explore intimate thoughts or passionate interests. After more than five decades, I now lean into my introversion and enjoy a new liberation from any number of damaging misconceptions and stereotypes. Here, I want to share with you what you might need to know in order to respond sensitively and supportively to your own introverted family members, friends, and colleagues. It is very likely that someone you know, respect, and interact with every day is an introvert, and absent awareness, you are probably creating stress in your relationship or causing unnecessary suffering. If the relationship is important to you, a little awareness can result in great uplift.

Extroverts are the antithesis of introverts

Extroverts are energized by people, and wilt or fade when alone. They often seem bored by themselves, in both senses of the expression. Leave an extrovert alone for two minutes and he will reach for his cell phone. In contrast, after an hour or two of being "socially on," introverts need to turn off (socially) and recharge.

My own formula is roughly two-three hours alone for every hour of socializing -- JUST TO REGAIN EQUILIBRIUM.

For introverts, to be alone with our thoughts is as restorative as sleeping -- as nourishing as eating. The introvert motto: "I'm okay, you're okay—in measured doses."

How does introversion impact behavior?

Researchers have found that people high in this trait tend to have a smaller group of friends. While extroverts generally have a wide circle of friends and acquaintances, introverts typically choose their friends much more carefully. Their closest relationships tend to be profound and significant. They also prefer to interact with people on a one-on-one basis rather than in a large group setting.

It is important to note that introversion does not necessarily equate with shyness. In their book, The Development of Shyness and Social Withdrawal, authors Schmidt and Buss write, "Sociability refers to the motive, strong or weak, of wanting to be with others, whereas shyness refers to behavior when with others, inhibited or uninhibited, as well as feelings of tension and discomfort." Shyness indicates a fear of people or social situations. Introverts, on the other hand, simply do not like to spend lots of time interacting with other people. However, they do appreciate being around people to whom they are close.

How many people are introverts?

According to estimates, extraverts outnumber introverts by about three to one. Introverts often find that other people try to change them or even suggest that there is something "wrong" with them. Nothing could be further from the truth. While introverts make up a smaller portion of the population, there is no right or wrong personality type. Instead, both introverts and extroverts should strive to understand each other's differences and similarities.

As you might imagine, jobs that require a great deal of social interaction usually hold little appeal to people high in introversion. On the other hand, careers that involve working independently are often a great choice for introverts. For example, an introvert might enjoy working as a writer, accountant, computer programmer, graphic designer, pharmacist or artist.

Wildly. "It is very difficult for an extrovert to understand an introvert," write the education experts Jill D. Burruss and Lisa Kaenzig. Extroverts are easy for introverts to understand, because extroverts spend so much of their time working out who they are in voluble, and frequently inescapable, interaction with other people. They are as inscrutable as puppy dogs. But the street does not run both ways. Extroverts have little or no grasp of introversion. They assume that company, especially their own, is always welcome. They cannot imagine why someone would need to be alone; indeed, they often take umbrage at the suggestion. As often as I have tried to explain the matter to extroverts, I have never sensed that any of them really understood. They listen for a moment and then go back to barking and yipping.

How can I let the introvert in my life know that I support him and respect him? or her?

Hardly. This common misconception has to do with introverts being more intelligent, more reflective, more independent, more level-headed, more refined, more heroic, more important, and more sensitive than extroverts. is probably due to our lack of small talk, a lack that extroverts often mistake for disdain. We tend to think before talking, whereas extroverts tend to think bytalking, which is why extrovert-lead meetings often tangent from addenda and run long. [Although, to preserve credibility, I stipulate that there are powerful correlating (mis)behaviors that contibute to tangential distractions and marathon meetings, but that is subject for an entirely seperate essay.]

Unfortunately, extroverts have no idea of the torment they visit upon introverts. Sometimes, as introverts gasp for air amid the fog of extroverted 98-percent-content-free talk, introverts wonder if extroverts even bother to listen to themselves.

Still, we endure stoically, because the etiquette books—written, no doubt, by extroverts—regard declining to banter as rude and gaps in conversation as awkward. We can only dream that someday, when introverts are more widely understood, when perhaps an Introverts' Rights Amendment (IRA) movement has blossomed and borne fruit, it will not be impolite to say "I'm an introvert. You are a wonderful person and I like you. But now please shush."

There’s More to Introversion than You Might Think
Inside introversion's six facets and how they can change over time
By Susan Krauss Whitbourne Ph.D.

To Socialize or Not? That Is The Question
When does mingling make you happier?
By Susan Cain

Revenge of the Introvert
An introvert's biggest challenge is to not feel like an outsider in their own culture.
By Laurie Helgoe Ph.D.

An In-Depth Look at How Introverts Think
Introverts react quickly to new information but are slower to monitor change
By Susan Krauss Whitbourne Ph.D.

When Introverts and Extroverts Attract
4 things any 'mixed' couple needs to know.
By David Sack M.D.