Time Management is Ruining Our Lives 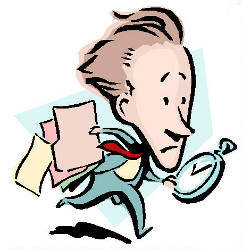 Most of us have experienced this creeping sense of being overwhelmed: the feeling not merely that our lives are full of activity – that can be exhilarating – but that time is slipping out of our control. The quest for increased personal productivity – for making the best possible use of your limited time – is a dominant motif of our age. And yet the truth is that more often than not, techniques designed to enhance one’s personal productivity seem to exacerbate the very anxieties they were meant to allay. The better you get at managing time, the less of it you feel that you have. It’s understandable that we respond to the ratcheting demands of modern life by trying to make ourselves more efficient. But what if all this efficiency just makes things worse?

The allure of the doctrine of time management is that, one day, everything might finally be under control. Yet work in the modern economy is notable for its limitlessness. And if the stream of incoming emails is endless, Inbox Zero can never bring liberation: you’re still Sisyphus, rolling his boulder up that hill for all eternity – you’re just rolling it slightly faster.

Given that the average lifespan consists of only about 4,000 weeks, a certain amount of anxiety about using them well is presumably inevitable: we’ve been granted the mental capacities to make infinitely ambitious plans, yet almost no time at all to put them into practice. The problem of how to manage time, accordingly, goes back at least to the first century AD, when the Roman philosopher Seneca wrote On The Shortness of Life. “This space that has been granted to us rushes by so speedily, and so swiftly that all save a very few find life at an end just when they are getting ready to live,” he said, chiding his fellow citizens for wasting their days on pointless busyness, and “baking their bodies in the sun”.

The time-pressure problem was always supposed to get better as society advanced, not worse.

Time management promised a sense of control in a world in which individuals – decreasingly supported by the social bonds of religion or community – seemed to lack it. Especially at the higher-paid end of the employment spectrum, time management whispers of the possibility of something even more desirable: true peace of mind. Time management gurus rarely stop to ask whether the task of merely staying afloat in the modern economy – holding down a job, paying the mortgage, being a good-enough parent – really ought to require rendering ourselves inhumanly efficient in the first place.

Then there’s the matter of self-consciousness: virtually every time management expert’s first piece of advice is to keep a detailed log of your time use, but doing so just heightens your awareness of the minutes ticking by, then lost for ever. As for focusing on your long-term goals: the more you do that, the more of your daily life you spend feeling vaguely despondent that you have not yet achieved them. Should you manage to achieve one, the satisfaction is strikingly brief – then it’s time to set a new long-term goal. The supposed cure just makes the problem worse.

One of the sneakier pitfalls of an efficiency-based attitude to time is that we start to feel pressured to use our leisure time “productively”, too – an attitude which implies that enjoying leisure for its own sake, which you might have assumed was the whole point of leisure, is somehow not quite enough. And so we find ourselves, for example, travelling to unfamiliar places not for the sheer experience of travel, but in order to add to our mental storehouse of experiences, or to our Instagram feeds. We go walking or running to improve our health, not for the pleasure of movement; we approach the tasks of parenthood with a fixation on the successful future adults we hope to create.

Part of the problem is simply that thinking about time encourages clockwatching, which has been repeatedly shown in studies to undermine the quality of work.

Which paths will you pursue, and which will you abandon? Which relationships will you prioritise, during your shockingly limited lifespan, and who will you resign yourself to disappointing? What matters?

Author: Oliver Burkeman is a Guardian writer based in New York. Read his column here. He is the author of The Antidote: Happiness for People Who Can't Stand Positive Thinking