Zarif to U.S. Senators: You Are Ignorant 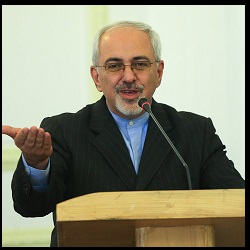 The Iranian foreign minister on Monday reacted to an open letter to Iran’s leaders by 47 U.S. Republican senators who had warned Tehran that any nuclear deal that the Islamic Republic signs with President Barack Obama’s administration won’t last after Obama leaves office. Mohammad Javad Zarif said the letter lacks “legal validity” and shows that the signatories of the letter are “ignorant of international law”. “In our view this letter has no legal validity and is just a propaganda scheme,” Zarif noted. The letter proved that “like” Israeli Prime Minister Benjamin Netanyahu these senators “are opposed to any deal”.

Zarif said it is surprising that while nuclear talks have not reached a result yet pressure groups in the U.S. have become so “worried” that they have resorted to any “unconventional way” to kill it. Expressing surprise on how it is possible that the legislators of a country write a letter against their own president and government to the leaders of another country, Zarif said, “The letter by the senators show that not only they are alien to international law but even not familiar with the details of the their own constitution about the authority of the president” in implementing foreign agreements.

Organized by freshman Senator Tom Cotton and signed by the chamber’s entire party leadership as well as potential 2016 presidential contenders Marco Rubio, Ted Cruz and Rand Paul, the letter is meant not just to discourage Iran from signing a deal but also to pressure the White House into giving Congress some authority over the process. “It has come to our attention while observing your nuclear negotiations with our government that you may not fully understand our constitutional system … Anything not approved by Congress is a mere executive agreement,” the senators wrote. “The next president could revoke such an executive agreement with the stroke of a pen and future Congresses could modify the terms of the agreement at any time.”

Arms-control advocates and supporters of the negotiations argue that the next president and the next Congress will have a hard time changing or canceling any Iran deal -- -- which is reportedly near done -- especially if it is working reasonably well. Zarif, who is a professor of international law, also said, “These senators must know that the U.S. is not equal to the entire world and that international relations is formulated based on international law and international commitments of governments and not based on the United States’ domestic laws.” The chief Iranian diplomat added that the senators who have signed the letter may not be fully aware that according to international law governments must “live up to commitments” with other countries and cannot renege on their commitments according to their domestic regulations.