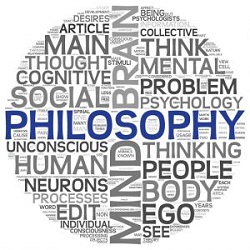 Is it possible for scientists and mathematicians to understand or appreciate philosophy? Do they lack a neccessary nimbleness to discern philosophical questions or the impact of such answers? For many (most) among the "harder" sciences, philosophy shares a stage with religion, art, or fantastic child-like whimsy.

Mike Alder (a mathematician) explains why practicioners of hard science don’t like philosophy but discretely pursue it anyway. He offers explination to explain why scientists and mathematicians are inclined to be dismissive of the subject. Additionally, Mr. Alder explains how and why they still explore philosophy pseudonymously.

The scientist’s perception of philosophy is that a philosophical analysis is a sterile word game played in a state of mental muddle. When you ask of a scientist if we have free will, or only think we have, he would ask in turn: “What measurements or observations would, in your view, settle the matter?” If your reply is “Thinking deeply about it”, he will smile pityingly and pass you by. He would be unwilling to join you in playing what he sees as a rather silly game.

Scientists: "truth about how the universe works cannot generally be arrived at by pure reason. The only thing reason can do is to allow us to deduce some truth from other truths. And since we haven’t got many truths to start out from, only provisional hypotheses and a necessarily finite set of observations, we cannot arrive at secure beliefs by thought alone."

Most scientists are essentially Popperian positivists – they take the view that their professional life consists of finite observations, universal general hypotheses from which deductions can be made, and that it is essential to test the deductions by further observations because even though the deductions are performed by strict logic (well, mathematics usually), there is no guarantee of their correctness.

How did it come about that anyone could imagine that pure reason, to use Kant’s term, could inevitably lead to truth about the world?

To many of the Greeks, the connection with reality was too tenuous to be worth bothering about. Axioms were regarded as ‘self-evident truths’, dredged by pure thought from reality, and the philosophers didn’t believe the axioms could be other than they were.

There are two basic reasons why mathematicians and scientists generally reject Platonist methods. One comes from Euclidean geometry. The axiom of the parallels was given by Euclid and asserts that through a point,

parallel to a given line, one line and only one can be drawn. A great many people felt unhappy about this axiom. It didn’t seem to them to come under the heading of a proper axiom, because they didn’t find it self-evident.

The second reason for rejecting Platonist methods was the revolution in philosophy made by Sir Isaac Newton. You can see what it amounted to by reading De Rerum Naturae by Lucretius, a gentleman who wrote a long lyrical poem about science (as he conceived it) which discussed among other things the question of whether we see things by something coming off the objects we see and coming into our eyes, or whether our eyes reached out in some way to touch the objects and grapple with them. Compare this with Newton’s Opticks, and you notice some substantive differences. Lucretius was a philosopher, old style. Newton was undoubtedly a philosopher, but he had a different and non-Platonist method.

Newton made his philosophical method quite clear. If Newton made a statement, it was always going to be something which could be tested, either directly or by examining its logical consequences and testing them. The first question the Newtonian philosopher asks is: What set of observations do you consider would establish the truth of your claim? If the answer consists of some definite set of observations and these are in fact made and produce the results required, the next step is to demand that the logical connections between the observations and the claim be provided.

There are, of course, a lot of pre-Newtonian philosophers around. People who might Newtonians of neglecting the study of vitally important matters such as ethics and the nature of mind. Newtonians simply reply that there is little constructive to say about such matters because, to be honest, Newtonians find them irreconcilable and therefore not understandable. That said, Newtonians are observed exploring these question, albiet differently. Ethics may be approachable through a study of evolution and repeated games theory. And the mind is being explored through Cognitive Processing, Biology, Chemistry, and Mathematics.

Such then is a view of the majority of practising scientists. They believe they have elevated philosophy to new heights, incorporating mathematics and reasoning to levels far past anything Plato mastered -- so the best one might hope for from the hard sciences is an acknowledgment that Plato was alright for his day, but that his day is long past. Scientists and mathematicians are indisputably trying to understand the universe, and a lot of thought goes into such efforts. They believe they are actually employing (natural) philosophy. But few would dare call it philosophy these days for fear of being mistaken for the sort of philosopher who is prepared to settle hard problems about minds and brains and computer programs with only the most tenuous knowledge of how minds and brains and computers actually work.

This is an abstract from the original publication. The original author goes much deeper into detail that I have shared here. Please visit the source for the full article if this has interested you.

Author: Mike Alder is a mathematician at the University of Western Australia. He has published in the philosophy of science although he is currently working on pattern recognition. He holds degrees in Physics, Pure Mathematics and Engineering Science.