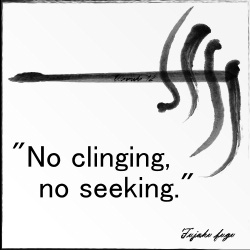 Samsara is the same as nirvana, defilement the same as purity, and delusion the same as enlightenment.  The challenge to understanding is due to one's ignorance -- the ignorance in mistaking phenomena for ultimate reality. Great is Mind. Heaven's height is immeasurable, but Mind goes beyond heaven; the earth's depth is also unfathomable, but Mind reaches below the earth.

Study Zen -- one discovers the key to all forms of Buddhism.
Practice Zen -- one's life is brought to fulfillment in the attainment of enlightenment.

Eisai Nyoan first practiced other forms of Buddhism. However, he was determined to further his Buddist studies outside Mount Hiei.  His journey through the Chinese Lin Ji School returned him to Japan as an enlightened Zen master in 1191. Thereafter he founded Japanese Rinzai Zen.

Eisai Nyoan first taught Zen at Kamakura with the full support of the ruling Shoguns, where Zen became popular among the samurais.  He would go on to teach at Kyoto and build the Kenninji Monastery.  His honor and far-reaching fame was extended by his influential writing.  Propagation of Zen for the Protection of the Country (Kozen Gokoku) argued that Zen was beneficial for the welfare of the people and the security of the nation.

Interestingly, in addition to Zen, Eisai Nyoan also introduced tea drinking as a way to refresh the mind and promote longevity.  As a result, tea drinking emerged as a core practice amon Zen practitioners.  Strongly influenced by Zen, the tea ceremony would later develop into an art form.

Today, most Rinzai masters look to Hakuin Ekaku (1686-1769) as the father of modern Rinzai Zen.  He rejected intellectual Zen and formalized practice.  Hakuin instructed practitioners to avoid discriminating between active and quiescent practice.  Quiescent practice is sitting meditation.  While active practice would classically be defined as integrating the spirit of Zen into daily living and the arts -- and the contemplation of koans.

A kōan ( /ˈkoʊ.ɑːn/; Chinese: 公案; pinyin: gōng'àn; Korean: 공안 (kong'an); Vietnamese: công án) is a story, dialogue, question, or statement, which is used in Zen-practice to provoke the "great doubt", and test a student's progress in Zen practice.  "Great Doubt" or challenging introspective inquiry is an essential element of kōan practice.  To illustrate the enormous concentration required in kōan meditation, Zen Master Wumen commented, "It is like swallowing a red-hot iron ball. You try to vomit it out, but you can't."

Hakuin often believed he had achieved enlightenment, only to discover otherwise following koan practice.  New practicioners are often suprised to learn that Hakuin's favorite method of Zen cultivation was through zazen, or sitting meditation.  However, this is understandable when one realizes that his meditation was, in fact, koan practice.